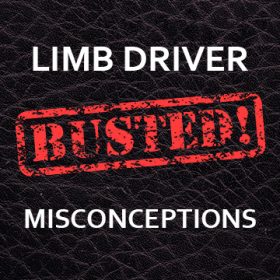 Let’s face it, Limb Driven is “different”. People are often times scared of change, and, especially in the archery industry, hesitant to try something they haven’t seen before. When the first limb driver was introduced by Vapor Trail over a decade ago, it was often-times entertaining watching peoples’ faces as they tried desperately to try to figure out what they were looking at, and how it worked.

Since then, many companies have hopped on board after realizing this system is the most forgiving, accurate, and easy to set up across the board. Still, many people are hesitant to try, trust, or believe in limb driven rests.

Misconception #1: “I don’t like that cord running up to my limb….it’s going to get in the way”.

In all reality, I have NEVER talked to a customer that has had issues with their cord to the point of it being an actual legitimate problem. If you think about it, you’ve already got a string and sometimes up to FOUR cables already running up and down on your bow. If you’re using a cable-driven rest, you’ve got a cord running ACROSS your bow from the riser to a cable. If you shoot with a quiver on, the quiver will be protecting your activation cord anyway!

Do me a favor….take your hand, pretend it’s a weed, stick, branch, or whatever you want, and run it up and down your bow between the string and cables…..if you’re running a cable driven rest, you got hung up on your rest activation cord didn’t you??? Now, if you were running a limb driven rest, you probably wouldn’t even had made contact with the cord…and if you did, it didn’t get hung up.

A story I like to tell (and many of you have probably heard if you know me very well) is about a guy at the Western Trail Shoot in Redding, CA a few years back. This guy (who I didn’t know before that day) was ALL OVER me about my activation cord. “That’s gonna get hung up on a branch sometime and you’re going to be screwed”……”I can’t believe you shoot with that silly cord on there running all the way up to your limb”…..Well, I’m not a great target shooter, but I was still beating this guy. Not sure why he was on my case, but, I let it go. After about 20 targets, he brought up the cord again. So, me being a respectful smartass at times, I took my Leatherman out of its case on my belt, flipped the knife out, reached up, and cut my cord. Right there on the 3D course with 5 targets left. The look on this guys’ face was priceless. I handed him the knife and said “Here, you cut your cable driven rest’s cord and we’ll see who’s up and running quicker”. “Absolutely not!! Why did you do that?? You can’t even finish the day now!” was his reply.

2 minutes later, my shoelace was now activating my rest and the guy never again mentioned anything about my launcher cord……

If you’re that concerned and worried about the activation cord getting cut, throw a piece of cord in your pack. It’s a 2-5 minute fix, which I can assure you outside of an extremely odd circumstance you’ll EVER have to do. I’ve run the rest with dental floss, shoelaces, etc. just to prove a point. I’ve hunted all over the country in some of the worst conditions around and I’ve never once worried about, or had an issue with, the activation cord. To see this in action, click Limb Driver Misconception Video

Are there circumstances that may require a little extra tinkering?? Yes. Sometimes quivers, sights, etc have brackets that may “make contact” with the cord. But, unlike a cable-driven rest, THIS DOESN’T MATTER!! As long as the cord is allowed to go slack and come tight, it is perfectly fine touching or rubbing different parts of your bow.

False, followed by me giggling. I hear “I want the fastest dropping fall-away out there” ALL OF THE TIME. Do you really?? So, if you had the fastest dropping fall-away possible, it would be down as SOON as you fire your bow correct?? Is your arrow moving at this point? No. So, by law of gravity, your arrow will begin to fall before it is traveling forward. Hey Einstein, this robs you of accuracy, obviously.

What you really want is a combination of your launcher staying UP as LONG as possible, yet falling at a fast rate once it is triggered. This, my friends, is one of the cornerstones of a limb driven rest. By running off of the limb, which is one of the last parts of the bow to return to its “zero” position, the arrow is supported long enough during the shot cycle to achieve the speed it needs to stabilize itself. Then, when support is no longer needed, the launcher arm is pulled away at an extremely fast speed (note I said PULLED….it doesn’t rely on a spring to operate it on the shot…the limb FORCES it down) allowing the arrow to exit the bow with near-perfect flight.

Misconception #3: “It’s not full capture…I don’t want my arrow to fall out”

Are you a monkey?? Do you hang upside down from a tree when you shoot?? The Pro-V has a near-full capture cage, and with either the SHAG pad or arrow holder used on the shelf, you should never have any issues with an arrow falling off your bow, no matter if you’re spot and stalking, still hunting, sitting in a tree stand, or riding on the wings of your favorite super-speed jet.

Before searching for issues for the simple purpose of finding one, stop and think about if it is something that would ever really affect you.

Misconception #4: “How can a limb driven rest be more accurate than my cable driven rest?”

Great question, and I love answering it.

A cable driven rest can be a great rest, obviously. They’ve been around for a long time and thanks to companies such as Trophy Taker, QAD, Ripcord, Schaffer, etc, about every nook and cranny has been swept clean looking for ways to improve them and get a step up on the like-competitor. Here’s where the limb driver shines.

All previously-mentioned systems are held into a RIGID position at full draw. You draw your bow, your cables move, pull your cord tight, raises your launcher, and holds it tightly there. As your arrow passes across this RIGID surface, any imperfection in arrow spine, error in shooter form, tuning issues, etc can be magnified immensely as there is no forgiveness.

Limb Drivers feature a FREE-FLOATING head. Translation: A forgiving surface that can actually CORRECT these flaws.

Anyone can get a basic rest to shoot well at 20 yards. Get out to 50, 60, 70+ yards and imperfections are again magnified immensely. This is where you’re going to see your accuracy improve with a limb driver. Being held UP by a premium torsion spring, your arrow can actually press against the launcher, which can eat up any issues, correcting them to some degree, and returning the launcher/arrow back to its zero position before the end of the shot cycle. Result: Better forgiveness and accuracy.

Next, think about that cable driven rest. What happens if your cable stretches?? Your rest is out of time. What happens if your rest is set up incorrectly? That cord can pull your bow out of time/tune. THERE IS NO TIMING with a limb driver! I have unattached my activation cord dozens of times while in the middle of a 3D shoot just to show people how easy it is to setup. I usually hear “No, don’t do that!! I don’t want you to mess your rest up just to show me how it works!”.  Attaching the cord back to the rest takes all of 5 seconds, and I’m right back to where I was. No problem.

Misconception #5: “Well if the launcher stays up longer, won’t that magnify issues in a shooter with bad form?

To some regard, yes. However, my particularly inquisitive friend, the limb driver is AGAIN able to remedy this. By adjusting WHERE the activation cord is attached to the limb, you can actually control WHEN the launcher arm falls in the shot cycle. Closer towards the limb pocket equals earlier in shot cycle, closer towards limb tip equals later in the shot cycle. Boom: Remedied.

Misconception #6: “I only support products Made in the USA”

Take a look at our packaging. Take a look at our website. Stop by the shop and take a gander around. EVERYTHING we do is made in the USA. We have our own machine shop just down the road, and assemble every single rest right here on my desk in Ham Lake, MN. The only thing that Vapor Trail isn’t 100% in charge of, is the anodizing process which is outsourced to a local company across the street from our machine shop. We support good ole #murica!

So, in closing, misconceptions are abundant with all companies in all industries. Remember that just because your buddy at the local range said so, or some “genius” posted it on Archery Talk, doesn’t mean it’s chiseled into stone. Often people, including shop owners, only push things that they personally shoot and talk other products down. Do your research. Whether someone is talking down a competitor’s product OR our product, do yourself a favor and find out for yourself. Ask more than just a couple sources. Educate YOURSELF on products out there; don’t just rely on other people to make your mind up for you. Do this and I promise you, you will feel so much better about your decisions both in archery, and in life!